This will be the last post on July comebacks. Two of these comebacks are from July and some of the others are from August and September. I decided to combine them into this one post because I wanted to make a boy group-centric post with mostly groups I haven’t listened to before! Now, let’s get started!

since a lot of these groups are new to me, i’ll be looking up some info about them and add it into the post so y’all will learn some stuff about them too! let me know if you want this in future posts 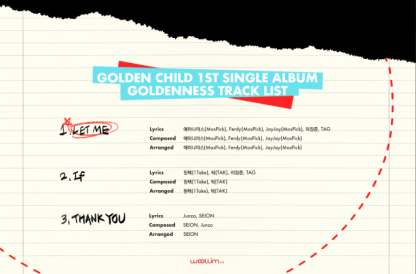 About: A 10-member (originally 11) group formed by Woollim Entertainment in 2017, the same company that formed the group Infinite. Fans are called ‘Goldenness’.

Let Me* – From the beginning, the song sounds fun and upbeat and summery. I really enjoy this song! It’s fun and keeps my attention throughout. There are also parts where I can sing along in English which I always like in a K-Pop song. The vocals and rap is balanced nicely. I’m impressed 😀 4.5/5

If – I feel like their style (from these two songs i’ve heard haha) is like Astro with maybe a bit of Seventeen mixed in. There are some interesting beats used in the song. One second there’s like a heavy bass and then the next second a light wind chime-like sound. I like it. 4/5

Thank You – From the beginning this one sounds more slow and meaningful. Slow, relaxing song that was easy to listen to. 4/5

Overall – This is a solid… mini? album. I enjoyed each song and can’t wait to listen to more of their stuff and maybe get to learn the members! 4.2 Stars. 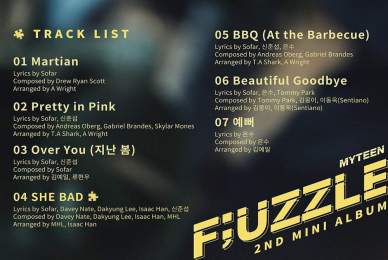 About: A 7-member group formed by The Music Works in 2016, but officially debuted in 2017. MYTEEN is short for ‘Make Your Teenager’. Fans are called ‘Youth’.

Martian – First impression from the beginning: I LOVE THIS SOUND. The vocals are nice too. I like this song as much as I like Seventeen songs (lol why do i keep mentioning them) which is a huge compliment! This song was a wild ride I loved it! 4.5/5

Over You – Sounds like a sad song. Probably about a breakup or something. I was working on school while listening to this song and it just… transported me into this zen mode. 4/5

She Bad* – This song has such a cool sound to it!! It’s not something you’d dance to but just… groove to I guess? ‘Martian’ feels more like a title song, but I do love this one as well. 4/5

**update: this song is now on my september playlist, i love it a lot more now than i did the first time i heard it

BBQ (At the Barbecue) – hahaha omg this reminded me of that one High School Musical song at the beginning, ‘What I’ve Been Looking For’. Haha okay anyways. It’s not a bad song. Summer vibes, given they’re singing about a BBQ. It also sounds like they’re singing “Be my Barbie at the BBQ” and just… that’s the cheesiest thing, I’m sorry. 2.5/5

Beautiful Goodbye – Here’s the sad and meaningful song of the album. This is one of those songs I could see being used in a K-Drama during an emotional angst-y scene. Not 100% in love with it, but it’s a nice song. 3.5/5

Yebbo – I’m getting Seventeen hip-hop unit vibes with this song. Which, again, is a good thing. It’s a good song. I have absolutely no idea what it’s about because I don’t know what Yebbo means but it’s good. 3.5/5

Stray Kids – I Am WHO

About: A 9-member group formed by JYP Entertainment through the reality show ‘Stray Kids’ in 2017. Officially debuted in March 2018. Fans are called ‘Stay’.

WHO? – Powerful, strong intro. The song overall is chill and rap-focused as I’d expect from Stray Kids. 4/5

Voices – Starts with nice singing for the opening and then this hardcore rapping hits me which honestly surprised me hahaha. This is on the ‘slower’ side but powerful and rap-focused too, which I love. 3.5/5

Insomnia – The only part of this I don’t like is that it 1) doesn’t sound too unique and 2) has a lot of EDM/electronic influences. So much so that I would only see myself liking it more if there was a really cool dance to it. 2.5/5

My Pace* – I’m getting… Block B vibes from the beginning? But also it’s different. Hard to explain, but I like it. I’m not sure about the rating cause I was focused on writing an essay for English  when this was on hahaha so I’ll give it another listen and rate it. 4/5
**i had to listen to this two more extra times cause i kept zoning out while doing other stuff

Question – Oooooh this one sounds nice. I like this one a lot. 4/5

Awkward Silence – This was a really good song too. 4/5

Overall – This was a good album. I compared them to some groups I love (Monsta x, Winner, Block B) and that’s definitely a good thing! They have a somewhat similar style to all of those groups but they’re still unique in their own way. 3.6 Stars.

About: A 7-member group formed by Jackpot Entertainment. They debuted on March 3, 2017 and their fans are called ‘PRISM’.

Members: Jean Paul, Shinwoo, Teno, D.L, Spax, K-KID, Taichi. (fun facts: jean paul was part of a group called BTL but they disbanded, shinwoo and teno were in the group Mcrown for a few months but left to be in this group, taichi is half-korean and half-japanese)

Take Off – The beginning is nice with the piano. Not what I was expecting. The entire song is a piano so I guess it’s the intro? I don’t know how to rate this haha but its calming and you can never go wrong with an instrumental intro. 4/5 Stars.

DRAMA (Instrumental) – Still good as an instrumental version. Has a clean sound to it which I like. It’s not over-complicated but rather relatively simple. More interesting with the lyrics, though, of course. 3.5/5 Stars.

Overall – Technically this is only one song since ‘Take Off’ is more of an instrumental introduction, so it’s hard to say where I stand on the group but they have stan potential from what I hear 🙂 3.8 Stars. 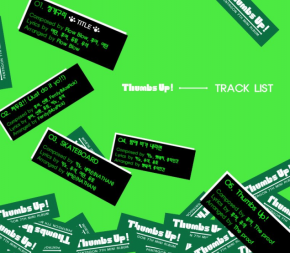 About: A 10-member group formed by Cube Entertainment in 2016. They were formed on the survival show ‘Pentagon Maker’. The fan base are called ‘Universe’.

Members: Jinho, Hui, Hongseok, Shinwon, Yeo One, Yuto, Kino, Wooseok. Members E’Dawn and Yanan are both on hiatus. E’Dawn because of his ‘scandal’ and Yanan due to health reasons. (fun facts: hui and e’dawn are in a group called triple h with hyuna, yuto is japanese, yanan is chinese)

Naughty Boy* – Fun and the beginning is unique so whenever it comes on, I know exactly what song it is, just like with ‘Shine’. Nobody’s been talking about this comeback besides the lack of E’Dawn and Yanan. Besides the absence of them two, I think this is a great song and they should still be supported as a group even without the two members until they come back. 4/5

When It Rains In Night – I like this one. It’s slower and more sweet-sounding. I don’t have much to say besides I really like it. 4/5

Just do it yo!! – Lol this title. The song itself it better than I thought it was going to be from the title. I don’t know why it just didn’t make me think the song was going to be anything good?? 3.5/5

SKATEBOARD – What is up with this random capitalization of song titles lately haha. It’s a nice song. I like it. In the songs so far, especially this one, I think the rap line is doing a good job without E’Dawn. The song is really fun, something Pentagon is great at. 3.5/5

Thumbs Up! – This song gives me cute summer romance/crush vibes. The only way I can describe it is… One Direction meets ‘Newton’ by Monsta x. 3/5

Overall – I was surprised by this album. Not that I didn’t expect it to be good but everyone has been hung up on the Hyuna/E’Dawn situation which happened not long before this comeback so it really affected this comeback, unfortunately. I miss listening to E’Dawn rapping in these songs but that doesn’t mean the songs were any less as awesome as they usually are. I want him back more than anybody else (he is my bias after all) but don’t abandon the rest of the 8 members that have been working their butts off to make this comeback without two of their members!! ANYWAY (sorry, had to rant a bit) this was a solid album overall and I enjoyed every song. 3.6 Stars.

I loved writing this post, though it took me a while to compose because I had to decide which groups I wanted to review. But I liked the way this post turned out in the end and I hope it wasn’t too long!

Are you a fan of any of these groups? Do you have a favorite boy group comeback from the last few months? Are there any groups you think I should have reviewed but didn’t? Let me know!