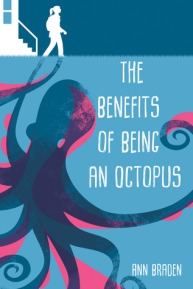 Title: The Benefits of Being an Octopus

“Seventh-grader Zoey has her hands full as she takes care of her much younger siblings after school every day while her mom works her shift at the pizza parlor. Not that her mom seems to appreciate it. At least there’s Lenny, her mom’s boyfriend—they all get to live in his nice, clean trailer.

At school, Zoey tries to stay under the radar. Her only friend Fuchsia has her own issues, and since they’re in an entirely different world than the rich kids, it’s best if no one notices them.

Zoey thinks how much easier everything would be if she were an octopus: eight arms to do eight things at once. Incredible camouflage ability and steady, unblinking vision. Powerful protective defenses.

Unfortunately, she’s not totally invisible, and one of her teachers forces her to join the debate club. Even though Zoey resists participating, debate ultimately leads her to see things in a new way: her mom’s relationship with Lenny, Fuchsia’s situation, and her own place in this town of people who think they’re better than her. Can Zoey find the courage to speak up, even if it means risking the most stable home she’s ever had?”

This book broke my heart into a million pieces. It’s rare when I’m completely engulfed in a book and feel so much for the characters and what they’re going through. But I felt for these characters so much. I felt their desperation and their struggles and every raw emotion they experienced.

The book follows our protagonist Zoey. She lives in a small trailer with her three younger siblings, her mother, her mother’s boyfriend that provides for them, and his friend that often stays there. Zoey has social anxiety (though it’s not explicitly stated in the text) and is always teased and bullied in school for her appearance and ‘stink’ since she lives in a trailer park and her family barely has any money to get food on the table.

At the beginning of the novel, Zoey is in a state of mind where she misses her old mom that used to smile and be fun and be a mom. She isn’t sure where she fits in, and she is always letting others talk about her in bad ways. She has absolutely no self-confidence and is scared of others.

“An octopus might start out defenseless, but it sure doesn’t stay that way.”

She grows exponentially by the end of the novel. I loved reading about how she became stronger and started standing up for herself, the things she believes in, and others she cares about. Zoey might be one of the younger protagonists I’ve read about – 14 or 15 years old – but she was definitely up there as one of the smartest and strongest I’ve ever read.

As a character, Zoey is wonderful. She’s flawed and made decisions that had me frustrated but they were realistic. She joined the debate club at her school but she isn’t confident enough to stand up and talk so she would skip or run out of class. This was annoying but realistic.

I also loved that even though she grew a lot and became more outspoken by the end of the book, her personality and the way she acted didn’t change. She was still the same person, but stronger and more resilient.

Family was such a large focus of the book, as Zoey spends most of her time outside of school taking care of her younger siblings. Her mom is either at work, cooking dinner and running errands for her boyfriend Lenny, or sleeping so Zoey becomes the main caretaker for her younger sister and brothers. Their family might not be perfect, but they stick together against all odds which is what’s most important.

This book might be classified as middle grade but it read almost like a young adult due to the serious topics that are discussed such as domestic abuse and gun control. I think that these topics were handled very well by the author and written wonderfully given the intended age group of the readers and the age of the protagonist.

Overall this was a wonderful book that I read super quick. Whenever I picked up the book and started reading, I didn’t want to put it down. I recommend this to anyone looking for a book with heart, lovable (and hate-able) characters, and important topics.

What’s your favorite Middle Grade book? Do you have any book rec’s for books that handle serious topics? Have you read this book or do you plan on reading it? Let me know!

3 thoughts on “eARC REVIEW: The Benefits of Being an Octopus by Ann Braden // a story that broke my heart & mended it back together”