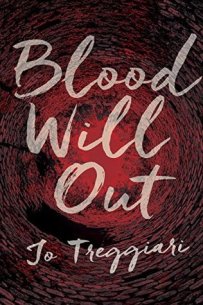 Title: Blood Will Out

She wakes at the bottom of a cistern, confused, injured and alone, with only the shadowy recollection of a low-pitched voice and a gloved hand. No one can hear her screams. And the person who put her there is coming back. The killer is planning a gruesome masterpiece, a fairytale tableau of innocence and blood, meticulously designed.

Until now, Ari was happy to spend her days pining for handsome, recent-arrival Stroud Bellows, fantasizing about their two-point-four-kids-future together. Safe in her small hometown of Dempsey Hollow. But now her community has turned very dangerous—and Ari may not be the only intended victim.

Going into this book, I was really excited. I was told that it had a similar vibe to Silence of the Lambs but in the form of a young adult book. What I wasn’t expecting was the mediocre writing, lack of plot, constant animal abuse/torture, and a disappointing reveal at the end.

As you can tell, I didn’t enjoy this book, mainly for the reasons listed above. Let me start by saying that I don’t read thrillers – ever. I also consider my tolerance for blood to be pretty high and it doesn’t really bother me when there’s violence/death/gore in a book.

Something that I thought was going to be just a one time deal was the torturing and death of animals. I have a really soft spot for anything that breathes. I don’t care what it is – if it’s a spider, leave it alone and let it live, if it’s a shark, just let it live its life in peace. I just really love animals. So reading this book – where animals were tortured and killed in descriptive detail – had me feeling sick to my stomach.

Like I said, I don’t mind blood and gore and death in the books I read. But describing every last single smell and feel of an animal’s insides and how it feels to take the life from them is… unnecessary. I felt myself sitting there nearly gagging because the author put so much description into these scenes.

Here’s the thing though – these scenes weren’t needed!!! Maybe one would have been good enough so that we get the idea that the killer dude is a psychopath but it was at least halfway through the book and the author kept describing the animal torturing when the killer’s point of view showed up.

Also. I’d like to say that the killer’s point of view chapters were so!! useless!! They did absolutely nothing to move the story forward and I felt like they were just there to fill up space because the author had nothing else to write about.

The actual writing of the book was… lackluster. It wasn’t particularly bad, but it felt to me like she only cared about writing in the killer’s point of view because that’s when – surprise, surprise – I skimmed the least. Oh. And I skimmed about the last 40% of the book because I seriously could not handle reading those torturing descriptions and the story just wasn’t moving forward.

Overall I feel like the author watched too many old slasher/thriller films one summer and decided that she was going to write one. But it didn’t work out as well as I think she hoped it would. I did want to like this book, I did. I just couldn’t 😦

It feels weird even giving it a 1.5 stars, but I feel like it would be a bit unfair because a) i didn’t guess the killer and b) the writing wasn’t that bad. But, overall, there were a lot of problematic aspects and it just wasn’t enjoyable for me to read.

What’s your favorite thriller? Have you read this book? Are you planning on reading this book? Let me know!

11 thoughts on “eARC REVIEW: Blood Will Out by Jo Treggiari // this book… was kind of disturbing, to be honest”