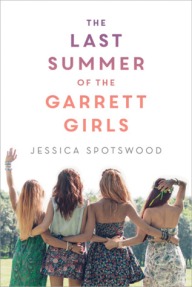 Title: The Last Summer of the Garrett Girls

One summer will challenge everything the Garrett sisters thought they knew about themselves—and each other.

Kat lands the lead in the community theater’s summer play, but the drama spills offstage when her ex and his new girlfriend are cast too. Can she get revenge by staging a new romance of her own?

Bea and her boyfriend are heading off to college together in the fall, just like they planned when they started dating. But Bea isn’t sure she wants the same things as when she was thirteen…

Vi has a crush on the girl next door. It makes her happy and nervous, but Cece has a boyfriend…so it’s not like her feelings could ever be reciprocated, right?

As the oldest, Des shoulders a lot of responsibility for her family and their independent bookstore. Except it’s hard to dream big when she’s so busy taking care of everyone else.

This book was marketed as a modern Little Women meets Gilmore Girls. I haven’t read Little Women, but Gilmore Girls is one of my favorite shows. It takes place in a small town and follows sisters during their last summer together and honestly I’ve never read a book with this premise.

As a book set in summer and it being the beginning of June now, I think that I read this book at the perfect time! I couldn’t have chosen a better book to start off my summer. From just the cover alone, I got such a summery vibe and I loved it because I never usually read books based on the current season.

The Last Summer of the Garrett Girls follows four sisters Des, Bea, Kat, and Vi. The book switches between each girl’s point of views. The girls’ parents died around 7 years ago, if I remember correctly, so that loss was mentioned throughout the book a few times.

Des – the oldest Garrett girl that has taken up responsibility over the family-run bookstore and care-taking of her grandmother and sisters. She holds back her own personal needs and dreams because she’s so busy taking care of everyone else around her. She makes stupid choices throughout the book, but I understand where she was coming from. She wanted to surprise everyone around her and break out of her shell. She wanted to show the people around her that she isn’t just a girl bound by her small town and her grandmother’s bookstore. That she’s something beyond that.

Bea – she’s the second-oldest and is about to head off to college with her boyfriend of five years. But the thing is, she doesn’t think she’s in love with him anymore or even if she still wants to go to college. She deals with anxiety throughout the book and I think the author was able to write this very well.

Kat – she is a theater girl that loves to act and have a spotlight on her. To be honest, I hated her character at first. She’s kind of selfish and she always has to make everything about her but by the end of the book I started to like her more.

Vi – she is my favorite of the sisters! She reads, she likes girls, writes fan-fiction, and she’s just such a precious smol bean I want to protect. Throughout the book she has a crush on a girl she isn’t sure is gay or not and helps her figure herself out.

I loved the sisterhood element of this story because honestly family isn’t explored much in YA. Sisters that actually have a good relationship with one another and stick by each other through thick and thin is even less explored. As someone that considers my sister my best friend, I appreciated this sentiment to sistership (lol did i just create a new term?)

The diversity really surprised me. One of the sisters is gay (and she is the most precious bean in existence), I would like to think that another one of the sisters is asexual or aromantic but it was never really addressed, and there are two bisexual POC characters!! One Latina and the other Korean, which I loved to see.

Although I loved most elements of this book, a few things bothered me. Firstly, one of the sisters ended up cheating on her boyfriend and just… I know that she felt bad for doing it but she still ended up being with the dude she cheated on him with and just… it didn’t feel right.

I also didn’t like Kat. I felt like she was doing everything for the wrong reasons. The way she always needed everyone’s attention pointed at her made me not like her character. Which was unfortunate, but she did grow by the end of the book.

Overall, this was a wonderful summer read! I would recommend it to anyone looking for a cute, fun contemporary book about sisterhood, friendship, and trying to discover oneself.

Do you have a sister? Are you happy about summer? Do you have any summer plans? Let me know!