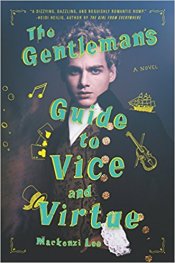 Title: The Gentleman’s Guide to Vice and Virtue

Henry “Monty” Montague was born and bred to be a gentleman, but he was never one to be tamed. The finest boarding schools in England and the constant disapproval of his father haven’t been able to curb any of his roguish passions—not for gambling halls, late nights spent with a bottle of spirits, or waking up in the arms of women or men.

But as Monty embarks on his Grand Tour of Europe, his quest for a life filled with pleasure and vice is in danger of coming to an end. Not only does his father expect him to take over the family’s estate upon his return, but Monty is also nursing an impossible crush on his best friend and traveling companion, Percy.

Still it isn’t in Monty’s nature to give up. Even with his younger sister, Felicity, in tow, he vows to make this yearlong escapade one last hedonistic hurrah and flirt with Percy from Paris to Rome. But when one of Monty’s reckless decisions turns their trip abroad into a harrowing manhunt that spans across Europe, it calls into question everything he knows, including his relationship with the boy he adores.

I was anticipating this book so much! The entire book community was, actually, and for good reason. It’s not every day that a historical fiction YA book has a bisexual main character that’s in love with his mixed race best friend.

Right when I heard that this book followed a bisexual main character I knew I wanted to read it. Having diverse characters in a contemporary novel is what you’d usually expect, but we still don’t see diversity in other genres such as historical fiction as much as we should. But this book gave us the diversity and did it perfectly.

Our main character Monty has been raised to be a gentleman by his father in order to one day run the estate where they live. Monty, however, never wanted that for himself and gets drunk, causes chaos, and sleeps with many women – and men – giving himself a bad reputation.

This book follows Monty, his best friend Percy, and his sister Felicity as they take a trip across Europe together in the 1700’s. This trip soon turns into a manhunt and they begin having to fight and run for their lives.

The way everything was described in this book made everything from the characters to the setting feel so real. When I’m reading a historical fiction novel, I like it when the author includes loads of facts and descriptions about the time period. This makes me – the reader – feel more involved and immersed in the story.

Besides the historical aspects of this book, the characters were all amazing! I loved the interactions between all of them and although Monty’s character development felt a bit rushed and forced, I still loved him as a character. I think Felicity was my favorite and she’s getting her own novel in 2018, which I’m super excited for!

Overall, I really enjoyed this book but I felt like the character development with Monty was a bit rushed and there were a few things that although I felt were fun to read about, were a bit strange to have in this particular book – if that makes any sense.

9 thoughts on “MINI-REVIEW: The Gentleman’s Guide to Vice and Virtue *Spoiler-Free*”